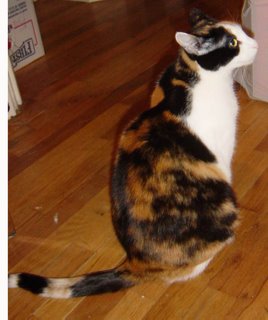 Life around my house, if anything, is never dull. Not only do I share my life with Kev (the fabulous husband), but I get to live with three of the most inspiring, entertaining and infuriating creatures. Simon is the leader. He was since the day he moved in. However, I'm getting ahead of myself. I'd like to share with you all the way they came to be in our lives, and where else to start but with our eldest,

Kev and I had just moved in with each other when we discussed the idea of getting a second cat. One that could be "ours" as Bob was really "mine" (although Bob was known to remove himself from my lap when Kev would get home so he could greet him). We ventured to the local Kansan SPCA. We were NOT going to get a younger cat (aka, kitten). I wanted to adopt an older kitty friend. We went to the "wrong" part of the cattery and entered the world of kittens and juvenile cats.

I spotted Chloe from the moment we walked into the room. She didn't really mew too much, but did chirp a little. We took her out of her cage and she sunk into my chest and started purring. Her beautiful green eyes watching mine. She was only four months old so we told her we owed the older kitties to take a look at them, knowing full well she was our kitten. She instantly became Kev's cat. She would crawl all over him, when not tormenting Bob.

She's now 8 years old. She's known every other kitty we have ever had (Bob and Fred...). She took care of Bob when he no longer could keep himself clean and she made Fred her bitch. She's a special gal in my life and when I look at her I still can't help but think, I am the luckiest girl in the world who gets to live and love Chloe. 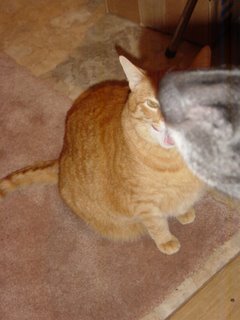 We had just gone through the horrible loss of our Freddie Lumkins. He was a total doll baby. We couldn't watch Chloe pine for him so we decided to go take a look. We entered the new cattery at the Portland SPCA and began the tour. I had previously told Kev that I really wanted an orange boy. We had already agreed on adopting a boy cat (keep the ratio right in the house). There were some very sweet cats there, but none were the ones for us. Until we turned the very last corner.

"Clarence," the sign read, "is four years old, domestic short hair, etc etc." We looked at him and didn't think there was any chance he was 4 years old and aged him at about 4 months, an easy mistake. We asked to visit with ol' Clarence and went to the room and waited. He was tiny. His right buttock was shaved. He was nosy as all hell. Once his nose stopped going overboard he snuggled right between the two of us and started falling asleep. Hook, line and sinker.

From the moment that boy entered the house we knew he would be the house Godfather. The Godfather is four and a half years old...Chloe's still pissed about the whole arrangement. 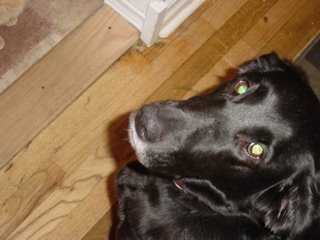 We had been at a party. One where one of you gets totally loaded and the other understands and is the designated driver. Let's just say the drive home was lovely and I remember all of it. :) I hung out with the coolest dog that night. Her name is Sister. Yellow Lab.

On our way to the car Kev calls out, "We can get a dog if she's as cool as Sister." Well, seeing as I was the dd and was going to remember those words, I set to the task of finding Bowzer.

We'd originally said, no dog before Kev got a job and definitely not before my family was coming for the holidays. But when he uttered those very words "we can get a dog..." I could not contain myself. I visited petfinder.com daily. I have no idea how many emails I sent him by the end. All those faces of those in need.

Then I came across Bowzer. She was my dog, our dog, and I knew it. She was the only one he responded with "I would adopt this dog" via email. We sent in the application and heard back that same night. Kev was to meet her the next day and make the decision. She had been fostered for a week with Karen and from the moment he took her leash, two days after that email, she was home.

I remember talking to him on the phone as he was walking with her. The excitement in his voice. He asked me what he should do and I told him to follow his heart because I already knew she was ours. He brought her to the store where I was working late. She still had no name (cuz I was surly NOT calling her Bowzer). So excited about everything, but very cautious. I wanted her to know I was her mom, but she just kind of shrunk back to Kev's side. However, when I got to the car, wiggles all over. And I asked Kev what he thought about Josie, like the outlaw.

Now she greets us each and every morning with wiggles and kisses because "HEY! YOU'RE HERE AND I'M HERE AND YOU'RE AWAKE!" Actually, she's like that every time we leave and enter the house (no different from a few minutes to many hours either, same wiggles and kisses). Even at four years old she's still got all those wiggles.

These three are something else. They are funny and make me laugh each and every day. They also have the ability to drive me batty (insert Dad's phrase, "that's not a drive, that's a short putt") and make me want to bang my head against a rock. But I love them. I love to watch their interactions with each other and with us and our friends.

And trust me when I say, there is never a dull moment...seriously, just trust me.
who writes the words---> shannon at 8:46 PM

How lucky can you be? You and Kev have earned and deserve the honor and privilege of sharing your lives with pets. And, these are no exception. It is amazing how much joy they can bring us.

Give them hugs from us.

damn girl.. i'm gonna hafta write a whole blog entry about how OUR pets moved into our lives now too....

so, i'm officially going to steal your idea and try to do that this weekend at some point!

Too fun - and the boozy cave/agreement to get a dog? I would also never forget those words, I would have them etched in steel, stone and glass and carry them around every single day until I got a dog, too. ;)

shannon
i knit. i practice yoga in the everyday. i squish on my three critters. i love my husband. i appreciate my life. i try to take nothing for granted. i suggest you all do the same.

how many read these words?

words from the past